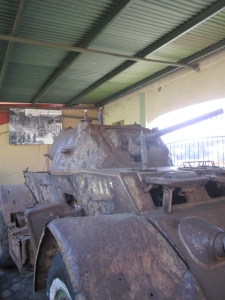 On Monday morning, I found another hostal and by 8am was on my way to the Museum of Traditions and Legends. It is housed in an old jail in the centre of town which was used to torture inmates prior to the revolution. The guide gives you information on the traditions and legends, intersperced with graffic accounts of torture. Quite a combination and both attached with sinilar gusto. I will have breakfast later.

The tank above is an old Mexican tank that was used in the liberation of Leon, the first city to be liberated in the revolution. The photo is the tank in action. The drawings below show some of the methods of torture. 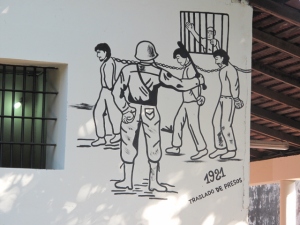 with the worst actions taking place in a fort some kilometres away. The inmates here were invariably beheaded and the skulls left in the fields. It was known as the field of cabbages as the skulls rotted in the soil.

The museum was started by a local lady to explain the traditions, she could choose where to site it within Leon. As the prison was important and needed to be preserved, as many people wished to visit it, she chose this as a site and it has been open for some years. 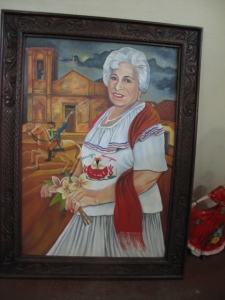 As you can see, even in Prison XXI there was a chapel. The lady is the benefactor/founder of the museum.

So on to the story of the Gigantonas (Lady Giants) and the Enano Cabezon (Big Headed Dwarf). You see them everywhere there is a party going on and the dance they do is special and today I learned the significance. Usually a teenage boy or older boy is the Gigantesca and a small boy is the Enano Cabezon. The dance is several hundred years old and makes fun of the Spanish conquerors. The giant represents the Spaniards with all their fine clothes and dancing while the dwarf represents the indigenous people. He has a big head as he is much more intelligent, able to work the land and live off the land. He wears fine clothes and is obviously a  superior being. The dance is based on a Spanish dance of the time. 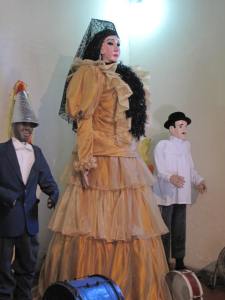 The tall Gigantona in the main square goes there to party in December and measures some 18 metres. The ones you see in the street are usually about 2.5m and there is a competition each year for the best dress, best dance etc…..all hotly contested stuff.

The next effigy is of an indigenous person carrying a Spaniard on his back. You will see a theme running here. The Spaniards lived off the land and the work of the indigenous people, and they poked fun at the Spanish all the time.

The Spanish had to work hard to trick the locals and convert them to catholocism. So they introduced a bull into the religous ceremonies. It was taken from the local dances and helped convince that locals that they lost nothing by converting. And very successful it was, judging by the scenes in church last Sunday. Showmanship lasts to this day.

Then on to the death carts that come to snatch bodies of those who cross the roads without looking at the crossroads.

and the women who have beed badly treated and come to stalk men. 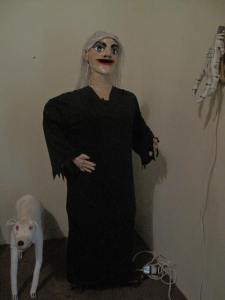 And the indigenous princesses tricked into falling in love with Spaniards then left in captivity once the rotten Spaniards find the gold and treasures.

Quite formidable women in their own right.

and finally a local dance and a mayor who saved infant children from the orphanage.

…….altogether one of the most entertaining museums I will ever have the chance to see and an exhibition of storytelling that was world class.

After a further half hour I was on my way to brunch, no more torture. I passed the usual Men at work sign….with everyone standing around talking. So just the same as Europe!

I went on to the Ortiz museum of Art. Said to be the best in Latin America and probably on a par with the Thyssen in Madrid. It is huge and covers everything from precolumbian to pop art, with religous art and niaive art thrown in.

The grounds were gorgeous

and this was my favourite,

Quite a place, four old houses with breezes flowing through them and wonderful art. A true delight.

View all posts by Agnes Kidd